“Far better it is to dare mighty things, to win glorious triumphs, even though checkered by failure, than to take rank with those poor spirits who neither enjoy much nor suffer much, because they live in the gray twilight that knows not victory or defeat. —THEODORE ROOSEVELT”

From Cartagena, Colombia, we flew to Panama City for six days.  A key objective was to check out the Panama Canal, a fascinating feat of American engineering, human spirit, and resilience.The complex engineering problems combined with the  immense hardships of the environment and living conditions of tens of thousands of worked created an almost insurmountable challenge.  Indeed, the French tried before the USA and gave up.  Many risked their lives and died from malaria and yellow fever.  From 1904-1914 mostly under Teddy Roosevelt’s leadership , the US began and completed a lock system canal on the Isthmus of Panama.  100 years later, 5% of the world’s shipping traffic continue to use these locks on an annual basis. The Panama government took control of the canal in 1999 and continue to invest in its infrastructure.  This spring, they will open a larger set of locks that, incredibly, will allow ships that can hold as many as 13k containers to pass (The current Panamax tankers have a capacity of only 5K twenty-foot units or TEUs).  China has started work on a competing canal in Nicaragua (originally one of the sites considered before building the Panama canal) but have recently stopped digging, and Nicaraguan support for the project seems to be decreasing among many. 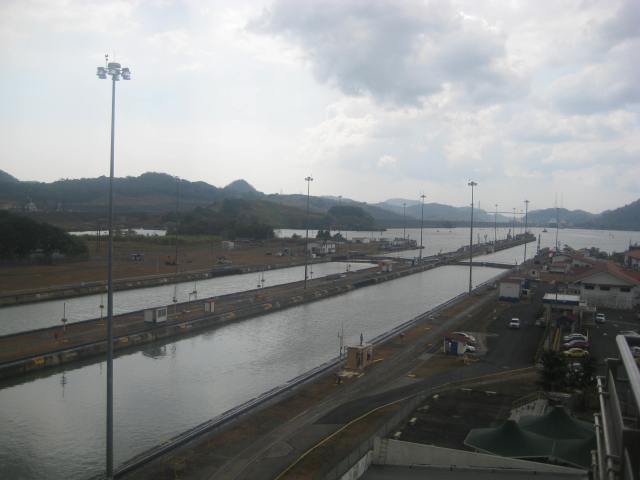 When visiting Panama City and the canal, there are at least two key places to visit:

The Miraflores Locks are about 40 minutes from downtown Panama City.  At Miraflores, there is a short (10 minute) movie about the canal, a small museum and viewing decks to watch the boats passing thru the Miraflores Locks. The viewing deck is the key reason to visit so that you can watch the super tankers and cruise boats squeeze through the channel. 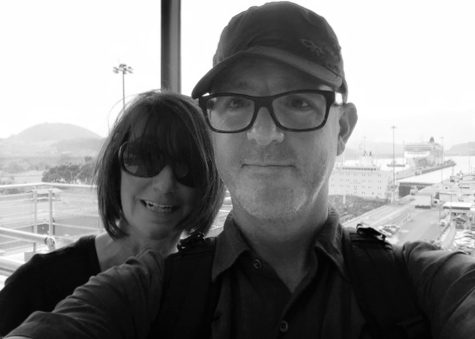 We visited the Miraflores Locks before the museum due to some logistics, but recommend visiting the museum first in Panama City.  The museum and movie at Miraflores is more fluff than information or data on the canal and is poorly done, in our opinion.  The main attraction  is clearly the locks and the viewing platform that allows you to view the operation. Be sure to check the the locks operation schedule for best viewing time of the boats though because there is limited boat traffic from 10am-2PM when they change the direction of the traffic.  We visited from 1-4:30 pm and the boats started coming thru around 2 pm including three private sailboats, two tankers and a cruise ship.  Intrigued by the engineering of the locks, the process and just watching the boats, we could have stayed longer.  Our current home city of Seattle also has a set of locks that work on the same principal and during the summer months, can be very busy and also worth a visit. So the empty Panama locks were not all that foreign or interesting to us initially, but when the enormous tankers started to enter that changed.  The size and scale of the boats passing through the Panama locks are quite incredible.

In the Casco Viejo neighborhood in Panama City, the Panama Interoceanic Canal Museum has better details on the history starting with the French failed attempt to the American undertaking of the building of the canal to the challenges in the 1960’s when there was fighting between the US and Panama to the signing of Torrijos-Carter Treaty (one of many) signed in 1977.

The architecture of the building (inside and out) housing the museum makes a visit worth it.  The building was built in  1874 and served originally as the headquarters of both the French and U.S. companies engaged in the construction of the canal.

Unfortunately, no pictures were allowed inside the museum, but we did get one shot of the stunning lighthouse beacon designed by Gustave Eiffel (you may have guessed that he designed some other things as well)  It was to be put on top of a lighthouse had the French completed the Panama Canal but they abandoned the project and the light was never used.

A friend recommended The Path Between the Seas to us for more information on the building of the Panama Canal. We are currently reading it so stay tuned for our book review.

Panama and Panama City were a surprisingly, fun visit and a good stop when in Central America. The diversity of the flora and fauna so close to a large city is quite amazing.