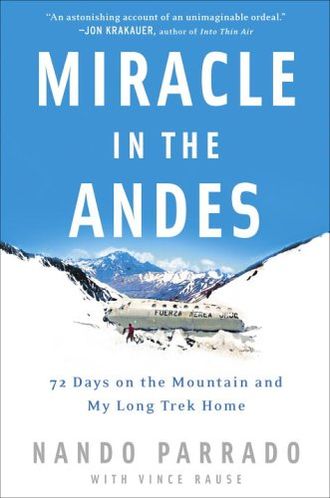 Wow – this is an inspiring story. Many of you likely know the story of the plane crash in the Andes in 1972 that was popularized in the book and movie, Alive. What you may not recall is the plane was carrying a ruby team from Uruguay over the Andes to play a match with a team from Chili.  The book was written by an English historian and biographer who interviewed the survivors and rescuers – it  was quite well received and is an excellent read.

Miracle in the Andes: 72 Days on the Mountain and My Long Trek Home was written by

Nando Parrado, one of the survivors and one of the two people that trekked out of the Andes on their own to find help.  It is a fascinating and gripping tail which adds a lot more context than Alive. Much of the book details the absolutely incredible trek to safety. After surviving a plane crash and then 2 months in the mountains with little to eat, two of the players hike from 12K ft up  and over a peak at  17K ft and than 70 miles down in artic conditions with only street cloths, ruby cleats, and snowshoes fashioned from seat cushions. Their climb traversed walls of snow, vertical ice climbs, and a technical descent that would challenge professional climbers with crampons and ropes.

It is truly unbelievable and inspiring. Its a great motivational story to stick in the back of your head for your own climbs or bad days.  The later part of the book details Nando’s views on atheism and coming to terms with survior’s guilt and the loss of his sister and mother who were also on the plane.

Its very worthy of a few hours.